Ireland at It's Best! 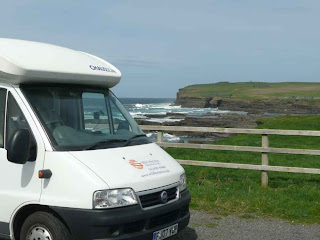 Who could ask for more? A free night tucked in beside the Downpatrick Headlands, sun belting down on the Atlantic just 20 metres away. Just up the (very narrow) road is Ceide Fields, the site of the the largest known Neolithic monument, in Europe. Sounds impressive, but you need a fair bit of imagination to grasp the significance of Ceide Fields. Lucky for us, we were just in time for the AV presentation and the guided tour. Without both, the site could easily be mistaken for a lumpy peat bog. In actual fact that's just what it is and it's the peat that has preserved this 6000 year old farming settlement. The stone walls that divided the fields, just as they do in much of Ireland today, were slowly covered by bog over a period of thousands of years. Fields, outlines of simple dwellings and ceremonial burial sites have all been preserved by the slowly rising bog.
Sometime in the 1920's, a local school teacher noted unusual rocks below the peat he was cutting. Eventually he also discovered a regular pattern in the rocks. With modern sensing technology, it has been established that the settlement pattern of parallel walled fields and associated settlements is repeated for over 10 kms along the coastline. A thousand years before the Pyramids were constructed, these simple farmers had sufficient knowledge of geometry to lay out a system of rectangular fields and a social system that supported planned construction of hundreds of kms of stone walls.
Crossing from Ulster (Northern Ireland) into the Republic today was much as any other border crossing in modern Europe; you don't know you've done it until the traffic signs change. Here it was the change from miles to kilometres that gave the game away. The UK, of course, still clings to miles and mph. Strangely, they sell petrol in litres and weigh things in kilos. Guess it's just a cultural thing? After all, they created the Imperial system of measurement.
So far this trip we haven't said much about our van. This is our fourth van hire in Europe, one in New Zealand and another in Tasmania. As well, we travel extensively in our own caravan at home. In all, we have done well over 2 years living “on the road”. So we fancy ourselves as experts! This van is easily the best we have had. Technology has moved on since our first hire in 1987. Everything works. Everything is so efficient! Water tanks (drinking and waste) are each 100 L rather than a skimpy 60 L. Water heaters and fridges are very light on gas and this van has an almost full size fridge. With digital TV, CD player, shower and chemical toilet, all we need is a solar panel (and SUN) to travel independent of caravan parks. We hired from Wild Horizons. They have reasonable prices and the best service!
25 April
Castlebar, Mayo
It's almost becoming boring, but it was yet another bright and sunny day today. Sadly, the forecast for tomorrow isn't as encouraging. Taking advantage of the fantastic weather and the lack of traffic due to the Easter long-weekend, we headed off on the narrow lanes of western county Mayo. The Mullet Peninsula was just beautiful, the open sea on one side and Blacksod Bay on the other. We'll let the pictures speak for themselves. 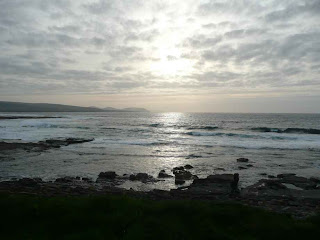 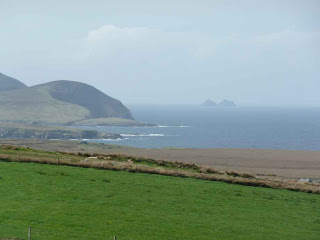 We also visited the small town of Knock, famous since August, 1879, when two women witnessed the apparition of Mary, Joseph and St John the Evangelist at a corner of the church. They quickly called other witnesses to support their sighting and the Church duly called it a miracle. Other miracles happened as sick and disabled people claimed amazing recoveries and a further, Church, investigation in 1936 upheld Knock's status. Today, a chapel has been built on the site of the apparition, constantly attended by the faithful. A basilica, capable of holding 12,000 people has been built nearby. What is disturbing is the line of taps dispensing holy water and the attendant shops with all manner of related holy treats. Rosary beads anyone? 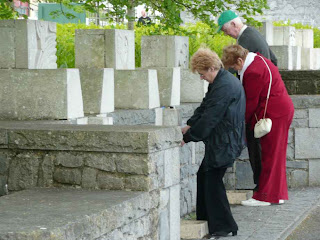 On the down side, some of the 'quaintness' of the Irish countryside has disappeared since our visit 10 years ago. Ireland has experienced a housing boom since the late 90's which has seen tens of thousands of new homes replace the more traditional stone cottages that made the countryside so attractive. Nobody begrudges these folk the good times they had during the height of the economic boom, the 'Celtic Tiger' days, but some attempt could have been made to retain the character of at least some of the countryside. Since the Global Financial Crisis of 2008/9, Ireland has fallen on extremely hard times. We have heard the outside view of why the Irish economy faltered. It will be interesting to hear some local views of how Ireland ended up needing an EU bailout to save its economy.
26 April Connemara
A church car-park somewhere in the wilds of Connemara is our home tonight. Hours of bumping along narrow country roads has been well worth the rattling crockery and slow pace. Much of County Mayo and County Galway are relatively isolated. Rolling brown hills with peat bogs in the valleys. Lakes and narrow peninsulas have us stopping at every crazy bend to catch the view. 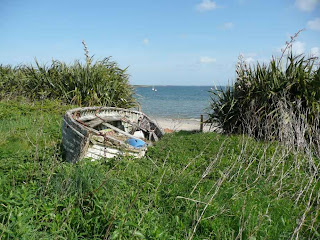 We struck a bit of a problem with our credit card today. Apparently, Aldi Supermarkets only accept Irish cards! Lucky for the check-out chick, we had just enough cash to cover our purchase. This has happened to us before in Scandinavia. Our planned response to this uncivilised treatment is to just leave our groceries on the counter and walk away! Our protest that our money isn't good enough for the company. Perhaps they could learn from Asian countries, where even the hawkers beside the road have credit card access and accept all cards! 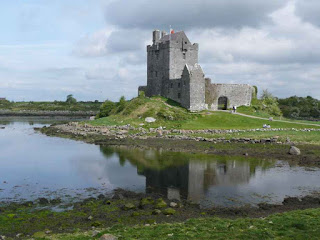 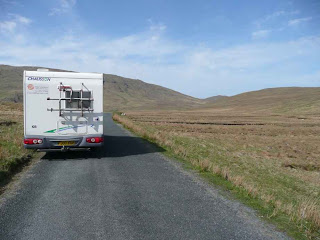 27 April Doolan
Eight o'clock and the sun is still beating down – and warm!
Twilight, as we have said before, is an anathema to us. But we love it! Sitting in a beer garden in the once classic town of Doolan with a Guinness on the bench in front of us and the company of a couple of like travellers is about as good as it gets.
Doolan is 'once classic' because it was once an isolated village where traditional Irish music was played in the quaint local pubs. Last time we were here, ten years ago, there was nothing much to Doolan. Today, it is a tourist town. New houses, gift shops, crowded streets and no room to park. Progress! 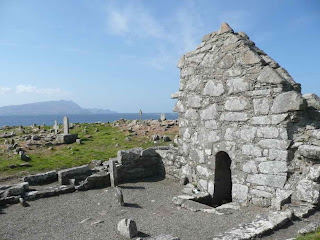 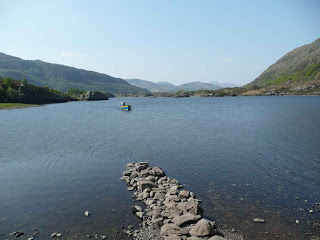 On the subject of houses. How many houses do the 4 million people of Ireland need? There are thousands upon thousands of new houses here! Either each Irish citizen has two houses, or foreigners are building here big time. We suspect that the bursting of the Irish housing bubble, that recently contributed to the demise of the Irish economy, is to blame for the litter of new housing estates that have destroyed the traditions of Irish rural housing. 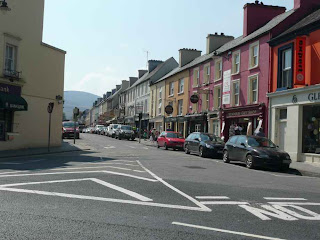 Paul and Janita
We are a couple of 'middle aged' (well at least one of us admits to being middle aged) retired Australians who are now living 'gracefully' enjoying our family and travelling as much as we can. We live in the sub-tropics, so the summer at home is HELL so we seek out cooler parts of the world during the southern hemisphere summer. Guess that makes us the opposite of 'snow birds'? See some of our other travels at: www.brisbanecornershop.com